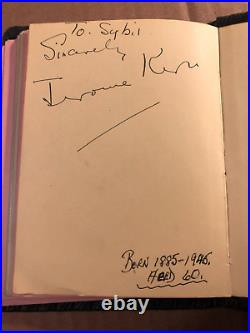 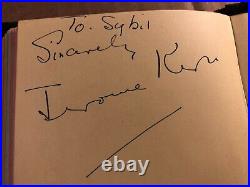 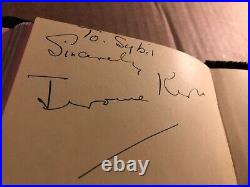 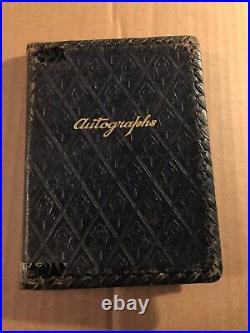 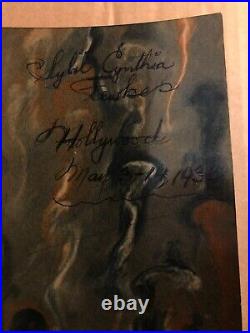 Direct from the autograph book of a young girl who stopped in Hollywood on a world tour. 1936 was the year his musical showboat was adapted to the screen by director James Whale and the year of his classic Fred Astaire and Ginger Rogers movie musical Swing Time. Swing Time (1936) included the song “The Way You Look Tonight”, which won the Academy Award in 1936 for the best song. Other songs in Swing Time include “A Fine Romance”, “Pick Yourself Up” and “Never Gonna Dance”. The Oxford Companion to the American Musical calls Swing Time “a strong candidate for the best of the Fred Astaire and Ginger Rogers musicals” and says that, although the screenplay is contrived, it left plenty of room for dance and all of it was superb. Although the movie is remembered as one of the great dance musicals, it also boasts one of the best film scores of the 1930s. Jerome David Kern was born in 1885. He began his stage career grafting American songs (for which he wrote the music) into imported European operettas. His breakthrough came with the song “They Didn’t Believe Me”, written (with lyrics by Edward Laska) for a show called “The Girl from Utah”. It established him as a major American composer in 1914. Married to a Englishwoman, Kern became an Anglophile, and teamed up with British writers Guy Bolton and P. Wodehouse to write the so-called “Princess Theatre musicals”–shows like “Very Good, Eddie” and “Leave It To Jane”, which were unusual not so much for their silly storylines but for the fact that the characters were everyday people rather than the exotic characters of operetta, and also for the fact that these shows had few sets and small casts. He later wrote shows like “Sally” and “Sunny”, both loaded with song hits, star casts and spectacular sets but silly plots. Finally, looking for an entirely different type of musical, Kern decided to adapt Edna Ferber’s novel “Show Boat” to the musical stage. Although Oscar Hammerstein II agreed to do the adaptation and lyrics, nearly everyone (including Ferber) thought Kern and Hammerstein had lost their minds. “Show Boat”‘s storyline featured interracial marriage, wife desertion, alcoholism and gambling, and the most realistic characters ever seen in a musical up to then, not to mention the song “Ol’ Man River” and an opening chorus of black dockworkers singing about their work. Most of the songs were integrated so well into the story that they could not possibly have been sung in another show or taken out of “Show Boat” without damaging the plot. And “Show Boat” featured a song, “Mis’ry’s Comin’ Round”, which was so utterly tragic that Florenz Ziegfeld Jr. Ordered it cut–and it remained cut, existing only as background music, until the 1994 revival. In spite of all this, “Show Boat” became a huge hit and has remained one of the musical theater’s greatest classics and most often revived shows–the only musical pre-1943 to be revived over and over. Kern, however, did not experiment any further–his other hit shows, “Music In The Air”, “Roberta” and “The Cat and the Fiddle”, contain classic songs that are still sung, but the shows are almost never revived. After a heart attack in 1939, Kern wrote songs exclusively for movie musicals. Two of his movie musicals, Swing Time (1936) with Fred Astaire and Ginger Rogers, and Cover Girl (1944) with Rita Hayworth and Gene Kelly, have become famous for their songs and dances. Kern died of a stroke at the age of 60, in 1945. This item is in the category “Entertainment Memorabilia\Autographs-Original\Movies\Photographs”. The seller is “pengang” and is located in this country: US. This item can be shipped worldwide.