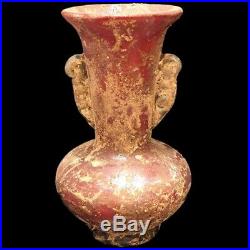 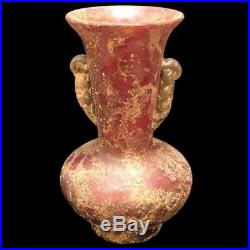 Here For Sale is a Very High Quality Very Large Red Glass Vessel, Dating From Around the 1st Century. This Piece is in Perfect Condition with No Repairs or Damage and also Uncleaned. Please Do Not Clean as this Could Damage Item. This Item Has Come From a Private 1980s London Collection, previous origin Eastern Europe. This vessel is in perfect condition. Height: 5.6 cm. Please Take a Look at My Other Items for Sale. Provenance: All Items are Acquired From Legitimate Sources Such as Galleries, International Coin Fairs and Old British and European Collections. Dimensions, weights and colour: all dimensions and weights (including ring sizes) are approximate and are for general guidance only; a single dimension given is normally the greatest dimension for the piece(s). Although we have made every effort to precisely display the colours and condition of a Lot, we does not guarantee that a device displays them accurately. The Lot may vary slightly from those images. Condition: items are briefly described with respect to condition using various phrases to signify the overall and general condition. It should be noted that items having significant age, sometimes being very ancient, often show minor blemishes and defects and these are considered to be normal and will not be individually described. IF WE HAVE NOT INCLUDED THE DATING OF AN ITEM IN THE TITLE OR DESCRIPTION IT IS BECAUSE WE CANT SAY FOR CERTAIN THE DATING OF THE ITEM. IT IS PREFERABLE NOT TO PROVIDE DATING ON MANY OCCASIONS AS TO NOT MISLEAD THE CUSTOMER. IF A COIN OR ARTEFACT IS DESCRIBED AS UNRESEARCHED, IT IS BECAUSE WE CANNOT SAY WITH SUFFICIENT CERTAINTY THE ORIGIN OR SPECIFICALLY WHAT EXACTLY THE ITEM IS. ON A RARE OCCASION FOR OUR BRONZE AND SILVER ITEMS WE MAY CLEAN AND POLISH THE ITEM AND RE-PATINATE IT WITH ARTIFICIAL PATINA TO BRING IT BACK TO IT’S ORIGINAL LUSTER. MANY TIMES WHEN REMOVING DIRT FROM A ITEM THE PATINA CAN ALSO BE EFFECTED GIVING THE ITEM A LESS THAN DESIRABLE LOOK. WE NEVER DEAL IN BRITISH ARTEFACTS. Egyptian Empire (3100BC to 30 BC). Assyrian Empire (1244-612 BC). Persian Empires (550 BC to 637 AD) including Achemenid Empire (550-330 BC), Sassanian Empire (224 BC-651 AD). Athenian Empire (461-440 BC, 362-355 BC). Macedonian Empire (359-323 BC). Roman Empire (264 BC to 476 AD). Parthian Empire (247 BC- 224 AD). African Empires: Ethiopian Empire ca. 50-1974, Mali Empire ca. 300-900 Teotihuacan Empire ca. 500-750, Aztec Empire 1325-ca. WE TAKE EVERY CARE TO ENSURE THAT THE DESCRIPTION AND SPECIFICATIONS ON OUR ITEMS ARE CORRECT. HOWEVER SPECIFICATIONS AND DESCRIPTIONS OF ITEMS ON ARE LISTINGS ARE NOT INTENDED TO BE BINDING AND ARE INTENDED ONLY TO GIVE A GENERAL DESCRIPTION OF THE. The item “VERY RARE LARGE ANCIENT ROMAN RED GLASS VESSEL 1st Century A. D. (1)” is in sale since Tuesday, May 26, 2020. This item is in the category “Antiques\Antiquities\Roman”. The seller is “hands_of_history” and is located in Forest Row, East Sussex. This item can be shipped worldwide.