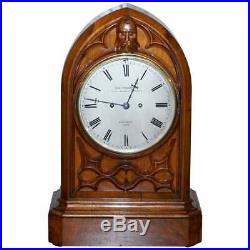 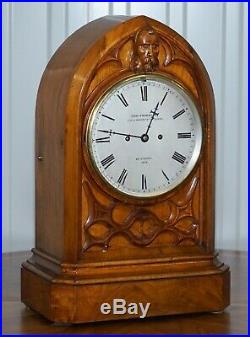 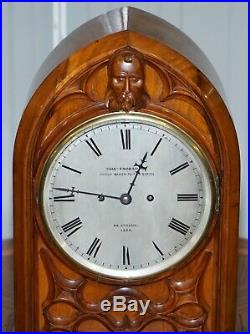 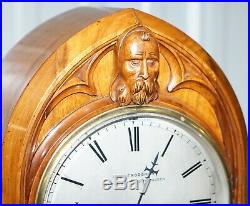 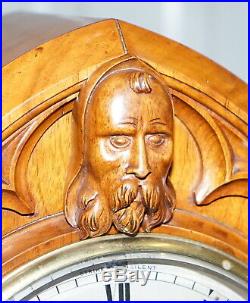 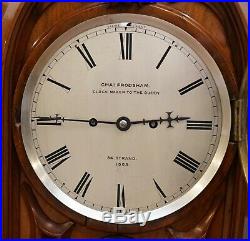 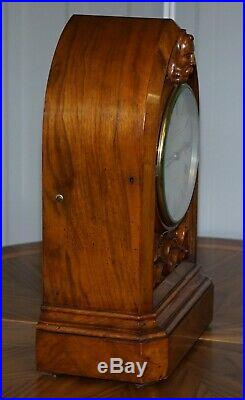 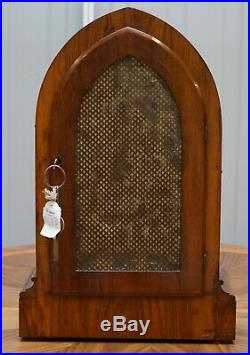 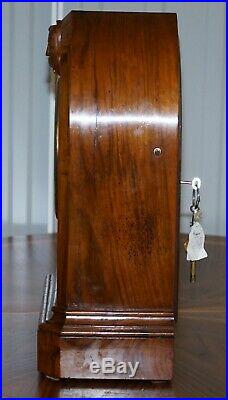 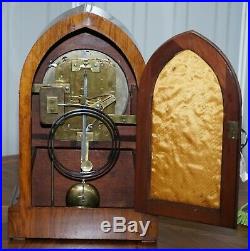 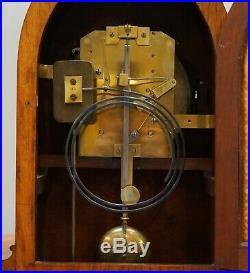 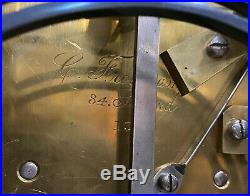 A very good looking and well made clock by one of the greatest clock makers in Englands history. The case has been cleaned waxed and polished, the keys work the locks however the lock to the glass case is temperamental and I would advise leaving it alone. Height:- 51.2cm. Please note all measurements are taken at the widest point, if you would like any additional or specific measurements please ask. Charles Frodsham (15 April 1810 11 January 1871) was a distinguished English horologist, establishing the firm of Charles Frodsham & Co, which remains in existence as the longest continuously trading firm of chronometer manufacturers in the world. In January 2018, the firm launched a new chronometer wristwatch, after sixteen years in development. It is the first watch to use the George Daniels double-impulse escapement. Frodsham was educated at the Bluecoat School, Newgate, London and then apprenticed to his father William James Frodsham FRS, a respected chronometer maker and co-founder of Parkinson & Frodsham. Charles showed early promise with two chronometers submitted to the 1830 Premium Trials at Greenwich, one of which was awarded 2nd prize. Nine further chronometers by Charles were entered to the Premium trials until they ceased in 1836. Soon after marrying Elizabeth Mill (18131879), Frodsham founded his own business at No. [5] He rapidly established himself as a leading London chronometer maker. With the death of another major chronometer maker, John Roger Arnold (son of the eminent John Arnold), Charles acquired the Arnold business in 1843, moving his family and business address to 84 Strand, London. [6] Trading as Arnold & Frodsham, Chronometer Makers continued till 1858. Charles Frodsham was a prolific and highly regarded horological writer, publishing numerous articles on the discipline. He corresponded with George Biddell Airy, Astronomer Royal, over many years, much of which correspondence is preserved at Cambridge University Library, covering topics such as middle temperature error, quick trains as advocated by Thomas Earnshaw, Greenwich Mean Time and Airys remontoire. In 1871, Frodsham published The History of the Marine Chronometer, the first English language treatment of the subject. Exhibitions, awards & medals. Frodsham was awarded the Telford Gold Medal from the Institution of Civil Engineers for his 1847 lecture on the laws of isochronism. At the Great Exhibition in 1851, he was awarded a first-class medal for his timekeepers. The firm won fourteen further medals and honours at the major international exhibitions over the rest of the nineteenth century. At the 1862 International Exhibition, Frodsham not only exhibited but was also one of the jurors, writing the detailed horological section report. Frodsham was a founding member, and later Vice President, of the British Horological Institute, and a Liveryman of the Worshipful Company of Clockmakers, in which he served as Master in 1855 and 1862. Frodsham died of liver disease in 1871, and was buried at Highgate Cemetery, London. His obituary stated that during a long and honourable career, he distinguished himself by his devotion to the science of horology, which he greatly advanced, and his clever works upon the subject are regarded as authoritative by members of the trade. Charles son Harrison Mill Frodsham (18491922) took over the firm, following in his fathers footsteps by publishing his own theoretical horological material, including an important series of articles entitled Some materials for a Resume of Remontoires. The firm continued to supply marine chronometers to the Greenwich trials, achieving significant success. In the 2nd half of the nineteenth century, the firm provided sidereal regulators for new observatories being established worldwide, notably in Australia at Sydney and Melbourne; in Italy at Padua, Palermo and Naples; and in the USA at Harvard and Lick. Charles Frodsham tourbillon no. 09182, now at Belmont which holds the record for the highest marks for an English watch gained at the Kew Observatory. Sidereal regulator now on display at the Norman Lockyer Observatory, originally installed at the Solar Physics Observatory in South Kensington. In addition to the production of standard high-grade pocket watches and domestic clocks, the firm specialised in complicated timepieces, including Tourbillon and Karrusel watches, many of which were submitted for observatory testing, frequently scoring highly. Charles Frodsham tourbillon No. 09182 (now in the Lord Harris collection at Belmont) with marks of 93.9, holds the record for the highest score ever achieved by an English watch tested at the Kew Observatory. Such watches were inscribed with the letters AD. This cryptogram for the year Anno Domini 1850 is formed by the numerical sequence of the letters in Frodsham, with the addition of Z for zero, and was used from that date on by the firm to indicate first quality. Wimbledon-Furniture is a privately owned family ran business out of Wimbledon SW19, we have four large storage warehouses, if you have any questions my number is under the business sellers information, please feel free to call or text. Please view the very detailed pictures as they form part of the description around condition. Please note vintage period and original items such as leather seating will always have natural patina in the form of cracking creasing and wear, we recommend regular waxing to ensure no moisture is lost, also hand dyed leather is not recommended to sit in direct sunlight for prolonged periods of time as it will dry out and fade. The item “VERY RARE LARGE GOTHIC REVIVAL CHARLES FRODSHAM CLOCK MAKER TO QUEEN VICTORIA” is in sale since Sunday, February 16, 2020. This item is in the category “Antiques\Antique Clocks\Mantel/Carriage Clocks\Pre-1900″. The seller is “wimbledon-furniture-01″ and is located in London Wimbledon. This item can be shipped worldwide.