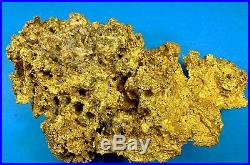 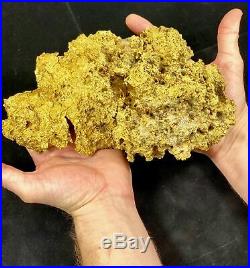 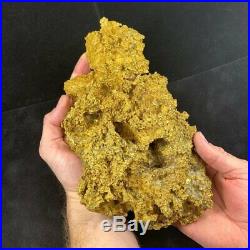 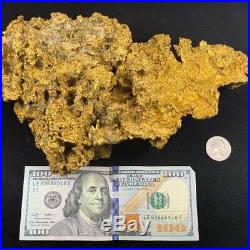 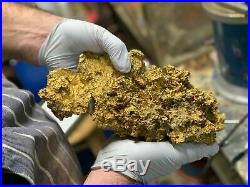 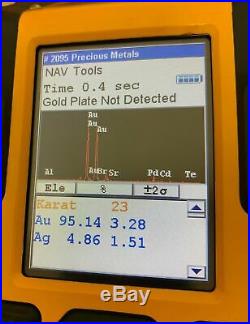 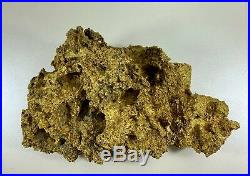 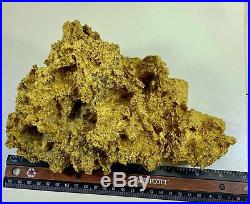 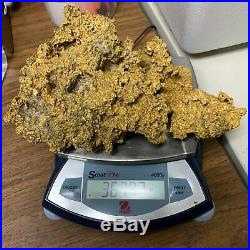 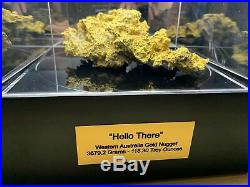 “Hello There” Western Australian Natural Gold Nugget Weighs 3,679.2. Grams 18.79 Troy Ounces. Length = 241 mm Width =148 mm Thickness =85 mm. Independent Testing X Ray. Au Gold = 95.14% Pure. Ag Silver = 4.86 % Pure. Other Naturally Occurring Trace Elements Under. 01% – Aluminum – Bromine – Strontium – Palladium – Cadium – Tellurium. Specs of Metal Testing at Random points on piece. Ndependent Testing X Ray: Au Gold = 95.14% Pure – Ag Silver = 4.86 % Pure. This is a rare piece because Most of my Australian nuggets come from Victoria’s Gold Triangle area. But this Collection comes from the WA and It is over 100 Troy Ounces there fore multiple people are. There are only around 100-150 of these in the World. All Nuggets are Pictured or Partially Pictured with a U. S Quarter which is 24.5MM in diameter to give you an idea of Size Proportion. Hello There comes with the Show case “Led Lights Mirrored backdrop, and Turn Table, ” Also an Elaminated appraisal and all picturing within the story of 118.30 Western Aussie Whopper. Through using my resources at the world number one Natural gold Jewelry Manufacturing shop once know as Conner’s. And now the company Orocal. If it isn’t authentic. History Around the WA Gold Fields. The Western Australian gold rush began with the first discovery of gold in the late 1890s. News of the gold spread as fast as the region’s wildfires and soon gold prospectors were arriving to seek their fortune and set up gold rush towns in the dusty landscapes of the Kalgoorlie, Goldfields and Murchison regions. They came slowly at first, but as the finds grew so too did the population. Lonely clusters of tents and rough bough sheds were soon transformed into booming Western Australian gold rush towns. Grand hotels lined the main streets and bustling town centres soon boasted butchers, bakers, schools and churches. And with the completion of the Golden Pipeline, this arid region was given a constant supply of fresh water. Many of the original townships remain and though the populations are not as huge, the character buildings and museums provide a fascinating glimpse into the wild and colourful spirit of the gold rush era. Journey of discovery, starting at. Hannans North Tourist Mine. In Kalgoorlie-Boulder and visiting some of the region’s many museums. Try your luck at gold. Or follow the Golden Quest Discovery Trail. Leading you through the gold rush towns of Coolgardie. Check out Outback heritage trails. For more details about attractions that explore the fascinating history of the Western Austra. The Details Behind Your Gold Nugget. What is a Natural Gold Nugget? It is a piece of gold that broke out of quartz deposits within the earth when erosion took place. It also goes by the name Placer Gold and each piece is a one of a kind with no two being exactly alike. Where can they be found? Wherever the effects of erosion took place. That would include rivers, streams, ancient dried up river channels and underground riverbeds. How pure are they? Gold nuggets range from 75 to 95 fine 18-23KT gold and can have other mineral content such as silver and copper mixed in with it. What sizes do they come in? Gold Nuggets come in all sizes, the smaller one range in sizes from 1 millimeter up to 6 and is often referred to as flakes. Bigger flakes are called nuggets and have been found as large as 2500 ounces although almost all nuggets bigger than 300 ounces were melted. How Are Natural Gold Nuggets found? They can be found in rivers and streams using a gold pan or suction dredges that act like an underground vacuum cleaner. Larger operations use large machinery that dig up huge sections of dirt weighing several tons and run it through machines that separate the gold from the dirt. Nuggets are also found using a metal detector. How are they weighed? They are weighed by the troy ounces. 12 ounces = one pound which differs from weight which is 16 ounces to the pound. The troy ounces are broke up into 20-penny weight to the ounces and use the symbol DWT or by the grams which has 31.1 to the ounces. The larger the nugget the more rare and valuable they are. A one-ounce nugget is now considered as rare as a five-carat diamond. How many of those do you own? Why are some real bright and others dull? Because it was formed underground in quartz deposit you often find quartz mixed in with it. When they broke off into the rivers and streams they tumbled against the sand and gravel, which gave the nuggets, it’s texture but dulled it. They can be cleaned in different solutions, and then tumbled in different media to give it the shine. What do we mean by Authentic, Genuine, Natural Gold Nuggets? Not all Gold nuggets are natural, some people man-make them by taking smaller gold flakes melting them and casting them into the shape of a nugget. Make sure to ask if they are genuine natural gold nuggets as found by the miners and come with a certificate of authenticity. The item “Very Rare Large Natural Gold Nugget Australian 3,679.2 Grams 118.30 Troy Ounces” is in sale since Sunday, February 24, 2019. This item is in the category “Coins & Paper Money\Bullion\Gold\Nuggets”. The seller is “nuggetsbygrant” and is located in Oroville, California. This item can be shipped to North, South, or Latin America, all countries in Europe, Japan, Australia.