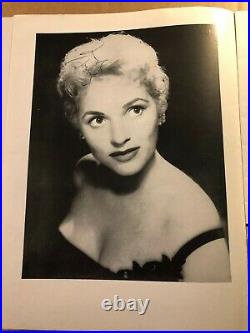 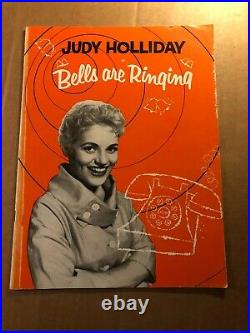 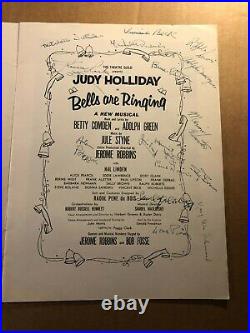 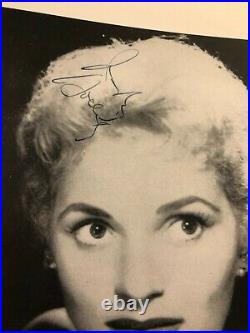 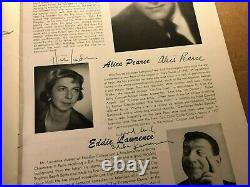 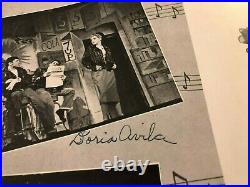 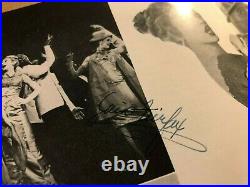 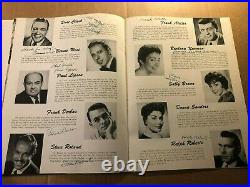 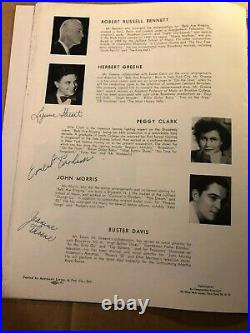 Here is a very rare early vintage original autographed large 9″ by 12″ playbill of the 1957 Broadway hit The Bells Are Ringing autographed by Judy Holliday, who won the Tony Award for her performance and later starred in the 1960 movie version of the play; also autographed by 33 other actors and theater professionals from the production, many very rare. The autographed photo of Judy Holliday would make for great display with or without the playbill. Judy Holliday was born Judith Tuvim in New York City on June 21, 1921. Her mother, a piano teacher, was attending a play when she went into labor and made it to the hospital just in time. Judy was an only child. By the age of four, her mother had her enrolled in ballet school which fostered a life-long interest in show business. Two years later her parents divorced. In high school, Judy began to develop an interest in theater. She appeared in several high school plays. After graduation, she got a job in the Orson Welles Mercury Theater as a switchboard operator. Judy worked her way on the stage with appearance in Boston, Philadelphia, Washington, D. And New York City. Judy toured on the nightclub circuit with a group called “The Revuers” founded by Betty Comden and Adolph Green. She went to Hollywood to make her first foray into the film world in Greenwich Village (1944). Most of her scenes ended up on the cutting room floor. Disappointed, but not discouraged, Judy earned two more roles that year in Something for the Boys (1944) and Winged Victory (1944). In the latter, Judy had a few lines of dialogue. With her success in that role, Judy was signed to play Billie Dawn in Born Yesterday (1950), a role which she originated on Broadway. She was nominated for and won the best actress Oscar for her performance. After filming The Marrying Kind (1952), Judy was summoned before the Un-American Activities Committee to testify about her political affiliations. Fortunately for her, she was not blacklisted as were many of her counterparts, but damage was done. Her film career was curtailed somewhat, but rebounded. She continued with her stage and musical efforts, but with limited time on the screen. After filming The Solid Gold Cadillac (1956), she was off-screen for four years. Her last film was the MGM production of Bells Are Ringing (1960) with Dean Martin and it was one of her best. Judy died two weeks before her 44th birthday in New York City on June 7, 1965. Very rare Judy Holliday autograph from one of her best roles and very rare collection of autographs. The item “Judy Holliday Very Rare Autographed Large Program Plus 33 Other Autographs” is in sale since Sunday, July 11, 2021. This item is in the category “Entertainment Memorabilia\Autographs-Original\Movies\Photographs”. The seller is “pengang” and is located in Marietta, Georgia. This item can be shipped worldwide.